Free Delivery on orders above ₹2000 (India Only) 🚀 “The natives of Kashmir are in the habit during the cold weather of carrying about a small pot covered with basket-work called a Kangri; when in use it is filled with hot embers. On preparing to go to sleep these people very frequently put their kangri with its ignited contents inside the breast part of their upper garment, a practice which very often results in their being severely burnt about the chest, as it would seem they are very heavy sleepers.

The Kangri appears to have found a home in one part of Italy only. In Florence, during the winters, which are very severe, no Florentine woman of the lower classes walks abroad without carrying her Scaldino, a reproduction of the Kangri of Kashmir. Dr [Eugen] Hultzsch has shown that the use of portable fireplaces or braziers was known in India — in Kashmir — as early as the twelfth century A.D., and here we have their use in Persia, as well as in Spain and Italy, in a manner implying a long previous history.”

“Many varieties of the hot-water containers have been developed. As novelties in the English potters’ exhibition at the Philadelphia Centennial in 1876 were foot-shaped vessels for hot water intended for placing in boots for drying them, and concavo-convex vessels for applying heat to the abdominal region. The Museum has a rare pottery hot-water bottle (pl.3, fig.1) with formed depressions for the feet of a lady. This vessel is of glazed Binghamton earthenware and dates about 1840. Several varieties of hand stove are found in eastern Asia. They are usually of brass or copper, and consist of a small rectangular box with perforated lid like an incense burner, and have a handle. They are often quite artistic pieces of workmanship (pl4.1). Sven Hedin found this variety of heating device at Lan Chow, western China, and says: “Among other things I bought shakos, or hand stoves, shaped like teapots but with grated lids. You fill them with ashes and put two or three pieces of red-hot charcoal in the middle of the ashes. The sha-lo will then keep warm for a good 24 hours.”

The Japanese pocket stove, or belly stove, as it is called, is much in advance of the examples previously described in that it employs a specially prepared fuel whose origin is probably in ancient experiments to produce a slow match for preserving fire for a long time. The pocket stove is a box of copper or tin slightly curved to fit the wearer and with perforated sliding lid. paper cartridges filled with powdered charcoal of a specified kind are placed in the box, lighted at one end, and the lid closed. One charge gives out a gentle heat for four hours. Such a stove is cheap, useful, and efficient. Another form widely spread is a small vessel with a handle, in which a charcoal fire is carried about and used to warm the feet and hands. Perhaps the more familiar example of this personal stove is the scaldino of Italy, possibly of quite an ancient origin (pl.3. fig. 2). These little stoves are made of bronze and terrra cotta, vase shape, with lid. Sometimes they are real works of art, designed for use by the elite. In China, such stoves consist of a pottery bowl neatly encased in bamboo basketry. The Chinese bamboo portable stove has a base of sufficient diameter to prevent tipping over and is carried by a handle. (pl.3.figs.3,4).

A similar vessel, called Kangri, is used during cold weather at Srinagar, Kashmir. the fire bowl is incased in elaborately woven osier over plates of mica. On top is a yoke-shape frame with a loop for carrying without getting the fingers burnt. Collected by Dr. W.L. Abbott (pl.3. fig 5).

~ Based on notes on specimen found by Dr. William Louis Abbot (1860-1936) in Kashmir in between 1891 and 1894 and presented in ‘Fire as an agent in Human Culture’ (1926) by Walter Hough for Smithsonian Institution United States National Museum. 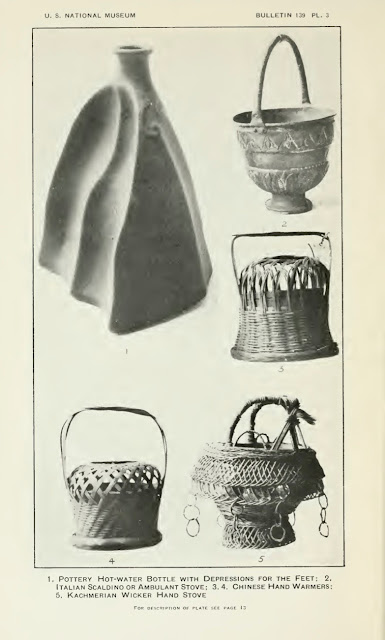 Compiled by Vinayak Razdan on searchkashmir.org.
Search Kashmir is one of the most well-researched information websites, where you can find everything to do with the history, culture and traditions of Kashmiri Pandits.
Next
Winter Specials: Kashmiri cuisine
Related Articles